Have you ever heard of OpenAppMkt? Perhaps Open App Mkt? OpenAppMkt is not a popular name compared to Cydia but it is often regarded as one of the best Cydia alternatives. This is because OpenAppMkt provides a great amount of free apps, tweaks, themes, and games for iOS 7, iOS 6, iOS 5, as well as older firmwares. There are a few famous apps come from OpenAppMkt and they are definitely worth to be mentioned. Cydia Installer, iFile, and Siri tweaks are just a few of them. They work perfectly on a jailbroken iOS device just like AppCake. So, you should try this awesome app if you are hunger for free apps and tweaks.

It is a must to download OpenAppMkt in order to access thousands of free apps and tweaks. Open your Safari browser and go to www.openappmkt.com. Tap on the “Install OpenAppMkt” button located on top of the page. A bookmark will be saved to your device home screen. That’s it. Nothing will be installed to your iOS device but just a Safari bookmark to open OpenAppMkt. 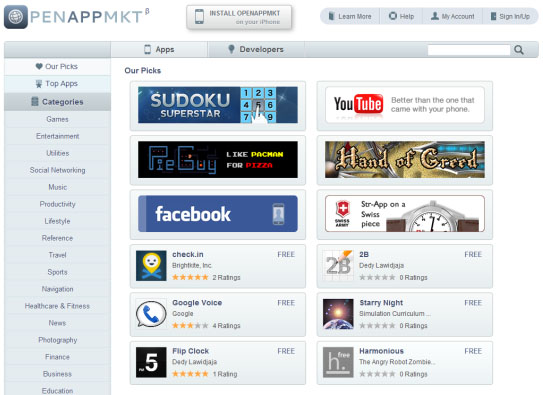 How to install Apps from OpenAppMkt

OpenAppMkt allows you to install apps to an iOS device without jailbreaking. It is true if you know how it works. When the developer of OpenAppMkt says “Install” means install a Safari bookmark on your home screen. So, you are basically getting the bookmark of a wanted app installed. Click on the bookmark and it will bring you to the web apps available in OpenAppMkt. In short, OpenAppMkt is an online web apps store.

Lately, there is a lot of complaining OpenAppMkt or Open App Mkt is not working for them. Rumors also said that OpenAppMkt is shut down. The official website shows only “Application Error” and that has been a few days. Now let’s see the top 3 rumors about OpenAppMkt.

Disclaimer: The content available in this article is purely for informational purpose or educational only. Appcakefans.com does not, and will never encourage pirated apps or cracked apps. The main purpose of having cracked apps is to allow prospective buyers to try it before buying it. Therefore, we recommend you to buy the app once you have tested it. The price for an iOS app will not burn your pocket. It is advisable to delete the app if it is not suitable for you.