Installous is no longer available on this planet while Apple gives birth to iOS 7. Everyone who have used Installous before are dying to know the best Installous alternatives when Hackulous declared that they are going to retire. Now, the jailbreak for iOS 7 is released and people still download Cydia to their iOS 7 device. The number of Cydia users is increasing. Hence, there is a need to sort out the best Installous alternatives for iOS 7 so that everyone can continue to enjoy the features provided by Installous. Now get ready of your plate and pick any of these alternatives. All of them are yummy and mouth-watering. The list here is sorted from A to Z and there is no ranking involved. 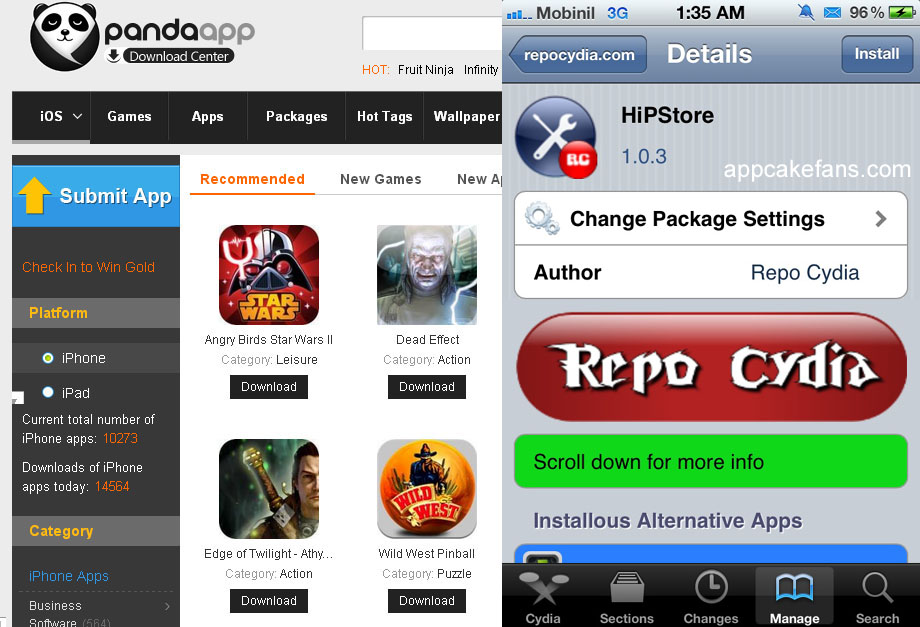 It would be funny if you said you are a huge fan of Installous but never heard of AppCake. AppCake has almost everything Installous has. It is now the closest app we can get in the market after Installous is gone. Free apps, themes, tweaks, games, ringtones, and many things are available with AppCake.

iFunBox is repeatedly bring up when the topic is related to Installous alternatives. This is because iFunBox allows any jailbreak user to download and install cracked apps. iFunBox is not made available as a mobile app but you can download the Desktop version to download free apps and then transfer it to your iOS 7 device.

Kuaiyong is one of the best Installous alternatives and everyone deserves a chance to try it at least once in a lifetime. The number of Kuaiyong users is on the rise when it was first release 2 years ago. Kuaiyong allows you to download free apps without jailbreak! It works almost similar to iFunBox where you need to use Kuaiyong software to transfer your dream apps to your iOS device. Hence, it works without jailbreak.

vShare, we Share! It sounds like we share the app we have! Alright, it is just a coincidence in naming this awesome app. vShare is also known as AppVV. It is a cool app that gives you millions of free apps. From games to themes to apps, vShare has it all.

Last but not least, one very important yet cool Installous alternative is Zeusmos. Zeusmos is important to be mentioned here because it has the capability to grant you the power to download apps from App Store for free. Once you have installed Zeusmos, open it and search for the app you want at the search bar on top. You can search by popularity or category. Then? One tap to install it.