Spider-Man Unlimited is the first free Spider-Man game developed by Gameloft. What’s more, one of the best super hero games from the Marvel comic. Get ready to swing and running up to the walls. Well, Spider-Man Unlimited you can experience the adventure, endless runner, unlimited fighting. Try your best skills and enjoy to save the world.

We are incredible excited in Spider-Man Unlimited game review. What’s good for this fancy game? The game has beautiful pictures with super-smooth graphic animation, which you can make every action run smoothly. It’s the greatest challenge to be the real hero. Moreover, it brings the movie experience on your mobile or tablet.

The extraordinary things you will uncover in this game is the way the Spider-Man jumps and attack it’s opponents. Spider-Man Unlimited brings you the most playable with over 23 different Spider-Men such as Iron Spider, Spider-Man Noir, Spider-Armor, Scarlet Spider, Cosmic Spider-Man, and many more. Besides, you have a chance to confront against Green Goblin, Vulture and Electro. You also can fight with 5 boss battles and 25 missions per issue. It’s awesome and exciting adventure, either you can combine and level up your Spider-Men to unlock him.

You may have wondered why everyone gets extreme about Spider-Man Unlimited game. This is a game play variety and fun mission you should not miss.

Spider-Man Unlimited is now available for free download on iOS, Android and Windows Phone. We recommend for fans of Marvel’s Spider-Man comics and action games. We hope everyone have fun and enjoy the game. Please leave us a comment if this is amazing game that you can play unstoppable. 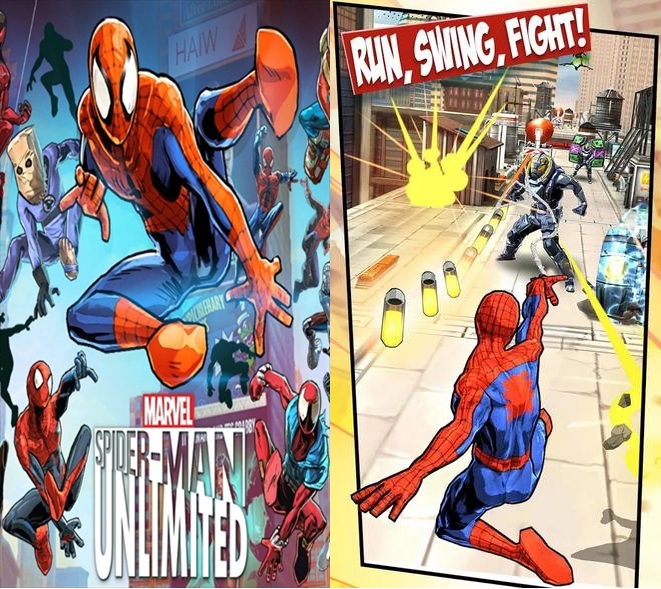 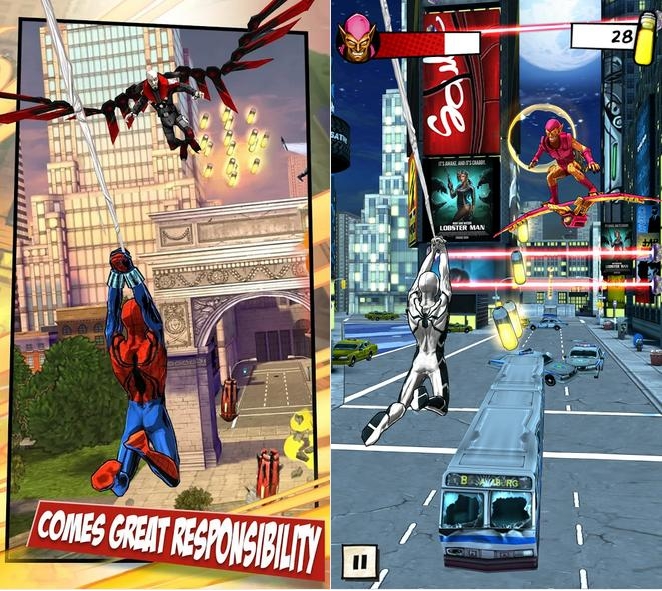 The following are several characters reveal that you will experience in this Spider-Man Unlimited game. Well, here you are!

An armored costume created to fight a resurgent Sinister Six, Peter Parker crafted it using technology that he developed in Horizon Labs. The costume greatly enhances his strength and speed and is chock-full of different audio and visual enhancements that allow him to see through visual illusions and even tell the identity of an enemy in disguise by their heartbeat.

Created by Tony Stark, the Iron Spider armor is fabricated with advanced protein-scale nanotechnology that grants it a variety of powers, including enhanced strength and durability, controlled gliding, and mechanical arms created from rapidly growing mono-atomic alloy crystals.

A suit worn by a twisted clone of Peter Parker that was doomed to a lifetime of slow, painful physical degeneration. Driven mad with envy, this clone spent years trying to kill Spidey’s other clone, Ben Reilly, and then Spider-Man himself. After finally being cured of his degeneration and realizing the error of his ways, the clone moved to Houston, Texas, and took on the identity of the Scarlet Spider.

The Cosmic Spider-Man was born after a lab accident granted Spider-Man the Uni-Power, a sentient energy field that grants whoever is united with it the powers of Captain Universe. After uniting with the Uni-Power, Spidey’s new form gave him incredibly enhanced strength, speed, and senses, as well as limited telekinesis.

A clone of the original Peter Parker with all of his memories. Ben Reilly wandered the United States aimlessly for years before Aunt May’s presumed death brought him back to New York City. There, he was manipulated by a shadowy figure – later revealed to be Norman Osborn – into believing that he was the original Peter Parker! Ben Reilly took up the Spider-Man identity until his death at the hands of the Green Goblin, after which the truth about him being the clone was revealed.

After losing his Spider-sense and getting shot. Peter Parker creates this suit in Horizon Labs out of a highly flexible impact-resistant polymer that is resistant to bullet but does not impede his agility.

A redesign of the classic Spider-Man costume by Ben Reilly, the clone of Peter parker, that he wore during the brief time he was Spider-Man.

Developed by Peter Parker in the lab at Empire State University, this armor is extremely durable but is so bulky that some of his agility is hampered. The armor was later destroyed in battle.

An awkward young science nerd who wasn’t exactly Mr. Popular, Peter Parker’s entire life changed when he was bitten by a radioactive spider that gave him superpowers! Initialy trying to use then for his own fame and fortune Spider-Man decided to become a hero after ignoring a fleeing thief led to the death of his Uncle Ben. Since that day, Spider-Man has fought for those who cannot fight for themselves because, as his uncle said. “With great power comes great responsibility”!

A Spider-Man from a dark future where he murdered Kraven the Hunter. Last Stand Spider-Man operates in the shadows, constantly on the run from an increasingly brutal police force who considers him to be Public Enemy No.

Exciting in a pocket universe created by the Scarlet Witch where mutants are the dominant force in society. House of M Spider-Man is a famous public figure believed to be a mutant by the public at large. He is married to the beautiful Gwen Stacy and they have a child together.

Sometimes Spider-Man has to improvisel after having the Venom symbiote separated from him by Reed Richards in the Fantastic Four laboratory. Spidey was left in a costume (or lack thereof) best described as his birthday suit. However, with the aid of a spare Fantastic Four costume and a relatively stirdy paper bag, a new hero was born – the Bombastic Bag-Man, ready to swing around the city and make people wonder whether or not he’s completely sane.

A S.H.I.E.L.D.- designed stealth suit that Spider-Man wore during a cover mission to overthrow the government of Latveria, which was organized by Nick Fury after he could not get the President to approve of S.H.I.E.L.D. agents undertaking the mission.

A devotee of a ninja clan known as the Spider-Clan, Peter Parker became the last surviving member of the clan after his uncle was killed by Venom. Now he trains in the hopes of becoming powerful enough to avenge his uncle.

During the Great Depression. The young Peter parker is bitten by some cursed spiders that had been imprisoned inside of a golden spider statue. After receiving the spider bite, he finds he has the proportional strength, agility, and speed of a spider, as well as the ability to shoot organic webbing nets from his hands. Donning a black mask and trench coat, the newly empowered Parker fights crime across the economically depressed New York City.

Are you a good runner? Try Subway Surfers for PC